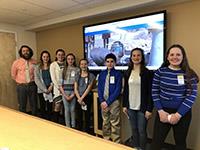 A group of Barrington Middle School (BMS) students came to TURBOCAM recently to tell us about their efforts to raise funds for a well project in South Sudan under the Water for South Sudan.organization. They did a wonderful job with their presentation and obtained a 501c3 status as a charitable organization, so they could receive donations. TURBOCAM donated to their cause and promised additional funds based on certain targets being met.

The fundraising idea started last year after the 7th grade class read a book called “A Long Walk to Water,” the story of a South Sudanese girl named Nya, who fetches water from a pond that is a two-hour walk from her home. She makes this trip two times a day, every day. It is also the story of Salva Dutt; how he survived the Sudanese Civil War as a refugee and made it to the USA, where he received an education and started the foundation Water for South Sudan. This foundation builds wells in small villages allowing a community to grow around it, bringing the people lives to live, not live to survive. 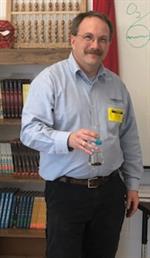 The BMS 7th grade students were so moved by the story they started their own group SSS or Saving for South Sudan, and after one year have raised all of the $15,000 required to build a well! It is impressive to see that the youth in our schools would have the vision and were willing to take action for a project of this magnitude.

Recently, Kyle Widman, a BMS 7th grade teacher, asked for a volunteer (Brad Crannell, TURBOCAM Research Scientist, was asked and he said yes.) to come and speak to the school about water filtration and the water mission work that TURBOCAM has been doing for years through the TurboSPAN project. Over the years, TurboSPAN, largely funded by the TURBOCAM cafeteria charity boxes, has designed, built, and installed systems in over 140 locations, including schools, orphanages, and rural communities.

The two ideas meshed perfectly to offer a class on water issues around the world. The Water for South Sudan project is providing water where none is available. The TurboSPAN project is filtering available water that otherwise would not be safe to drink.

The students came to understand why the wells at their homes provide clean water. The earth acts as a giant sand filtration system that cleans the water as it works its way through (Stage 1 in the TurboSPAN system mimics this). During the drinking water class, the students filtered contaminated water through 0.45 µm syringe filters, and quickly learned that filtering water is hard to do. It is difficult to push the water through the filter. Such a very fine filter will take out most bacteria, including cholera, which can be a problem in South Sudan and other places with poor sanitation. Even with all of that work, the students’ filters did not take out metals like lead or arsenic present in some contaminated waters. For that, they passed the water through a chemically reactive media (activated carbon mixed in a sand filtration column).

The class ended by challenging the students with this question: “Why did Jack and Jill go UP the hill?” The simple answer we all give is: “to fetch a pail of water,” but the story is much more than that. In agricultural societies, surface run-off water contaminates wells that are located at the bottom of a hill. A well at the top of the hill provides clean drinking water for Jack and Jill.

TURBOCAM thanks the Barrington Middle School and Brad Crannell for taking their time to educate students on clean water practices.